On the 22nd of February 2011 at 12.51pm I was in Christchurch having lunch with Bishop Victoria Matthews. I am ever grateful that her choice of restaurant meant we were sitting on large bench seats in a corner away from windows. As we sheltered under the sturdy tables I learnt that in the advice “duck, cover and hold”, the hold part is really important. It stops you being thrown across the room with everything else mobile – glasses, plates, chairs.

For the rest of the day I accompanied the bishop as we went back to the diocesan offices to gather up her staff; attempted to get to the cathedral but were turned back by terrified looking police; made sure staff could get home and then with those who couldn’t (and a German tourist we had welcomed into our little group), walked to the bishop’s house and huddled in her garden flat, the house obviously too damaged to enter. People eventually figured out a way to get home or to friends for shelter. I was the last of the group to leave as dusk closed in, collected and driven to the Antarctic Centre for evacuation with the members of a conference my husband was running.

As I left Bishop Victoria trudged back to the city to see where she could be useful. I have never forgotten her care for each person on her staff and her care for people as we walked the streets, dodging falling masonry and liquefaction.

I still jump at the kind of noise the earthquake made – like a train really. Just recently I was in a building with a large water feature and the pump made a surging noise. After 30 minutes I couldn’t stand being near the noise any more – it sounded like an earthquake coming. I feel like that and I only had to survive one day of the quake and its aftershocks. The people of Christchurch have had 6 years.

In 2011 I was Dean of Waiapu Cathedral in Napier. I had learnt about earthquakes (Napier’s was in 1931) and come to understand the significance of such an event in changing the lives and landscape of a town forever. The cathedral I was dean of was completely destroyed in 1931, was replaced by a wooden building within a year, but the “new” cathedral was not built until 1960.

The deans of our cathedrals meet every year for a conference and the conversations were always about how we balanced the demands of the three aspects of our lives – the congregation of “regulars”, being a cathedral or mother church for the diocese, and the call to serve the wider community. Each cathedral had a slightly different emphasis. If we had ever given ourselves scores Christchurch would have been the one that had the highest score for serving the wider community. It was a focal point for the city, a tourist attraction, and marketed itself as belonging to the city.

It is no surprise then that the city, its people, and now the government, have entered the fray and want to preserve what they had. I can see they feel that to restore the cathedral will be to give Christchurch back its heart, when the city is still heart broken and grieving. In a sense we could say that the cathedral and its deans and people have succeeded in being the cathedral for their city.

Mayor Lianne Dalziel says in her letter  of 1 July “In many respects, our interests are just as intertwined today as they were when the first European settlers to this part of the world established a Church of England settlement they called Christchurch. The images on the City’s coats of arms reflect this inextricable connection with the Mitre at its heart”. She goes on to say “In 1856, we needed city status to have a cathedral, and now in 2017, we need our Cathedral to help restore our city’s status and to enable the heart of our city to beat once more.” (I think she means we needed a cathedral to have city status.)

This description of the church and the city is a description of the church in the time of Christendom which lasted from the time of Emperor Constantine to somewhere in the middle of the twentieth century. Christendom is when the life and goals of the church and the civic life of a nation are aligned and essentially the same. With the passing of the modern and post modern era the church is entering life post Christendom and finding its place in a brave new world of multiple religions and no religion. This is a scary place for the Anglican church to be, we don’t really know how to operate in this post Christendom world and we cling to the familiarity of our institutional life.

The government and city council proposal for Christchurch cathedral is amazing – the majority of the funding and significant design and management support. The proposal takes account of the cathedral’s needs to upgrade and be more versatile inside. But then there is the threat of ongoing litigation and trouble if the Synod doesn’t take up this generous offer.

The Anglicans of Christchurch along with everyone else in the region have learnt to sit more lightly with their buildings. The diocese lost 28 churches, people lost their homes and workplaces. The question the synod has to decide is: will the heart of Christchurch really be restored by spending $104 million on a church?

Jesus who is the heart of the church had a lot to say about money – usually things like “you cannot serve God and wealth” (Matthew 6:24).

If the Anglicans of Christchurch want to be really brave and walk into a post Christendom future, just like they got up off the ground on February 22, 2011, I would say let the city have the cathedral, completely. Hand it over, let them rebuild it and have it as a museum, an icon, which is what they want. And then the church can be free to decide its own future, and start again, with no money and no land.

As the vicar of another iconic and historic church I don’t know if I would be brave enough to walk away if St Matthew’s was damaged and the city were clamouring for reinstatement. Especially if they were tempting me with the money. But I know what Jesus would do. 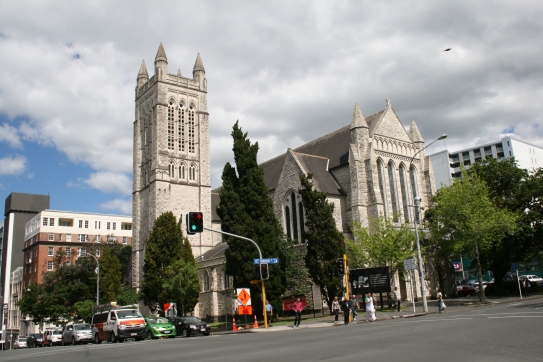 14 thoughts on “Christchurch and its Cathedral”