On Thursday July 20 I was part of a panel at AUT organised by the university’s Diversity Office. There were 4 speakers from different faiths as well as the Professor of Diversity Edwina Pio. The conversation was a rich one and these were my remarks:

It is a privilege to be with you all today and I commend you for taking the time to reflect on this important issue of religious diversity.

Yesterday I googled “church nz” in the newsfeed of google and the top hits were Tom Cruise visiting the church of scientology in Auckland; reports of Cardinal Pell in Australia being charged for child abuse; and Destiny Church not filing its tax returns.

That seems about right – the church gets in the news if it concerns a celebrity; abuse of children; or money; the main ones missing were same sex marriage and Christchurch Cathedral.

I then googled “Christian nz’ and learnt that Christian Lealiifano is coming back to playing rugby this weekend.

The most common way that NZers speak of Jesus and God is when swearing.

If they think about church at all it will be to assume that churches will tell you what to think, will moralise, be boring, staid, old fashioned and homophobic. “Preaching” is something negative – don’t preach at me. I seem to see people referring more and more to Christian beliefs as “fairy tales”.

Some years ago I was part of a Leadership training seminar which went for a whole week in Queenstown. It was aimed at business CEOs and leaders of government departments. The best thing about this week was that we were not allowed to say what our job was! So for a whole week I was able to engage in all the training and group work without the priest label on my forehead. On the last night we were sent our for dinner with our team of 5 and allowed to share our jobs. I was the only woman in the group so I said I wanted to go last and we played a guessing game. We eventually got to me and they eventually got there: “you’re not a bishop or something are you?” And the first words out of one of my team mate’s mouths was “oh my goodness I am just thinking of all the things I have said this week” and I said “welcome to my world”: where everyone assumes I am going to judge them.

There has always been a NZ cultural assumption that religion is a private matter. If you want to believe that is your right, but don’t bother the rest of us with it. As Aotearoa becomes more diverse and religious diversity is a part of this, some religions are more obvious to the observer. I absolutely admire the courage of women of Muslim faith who choose to cover their heads as a sign of their faith. They are bearing witness to their faith every day. I doubt there would be many Christians in NZ who would proudly wear a sign of their faith. (Of course wearing a cross is no use as it is worn as jewelry by anyone).

This diversity though gives those of us who are Christian an opportunity to step out and talk about our faith as well. Rather than accepting the lowly place accorded us in our culture we can claim afresh our beliefs and traditions and have them stand equally alongside our sisters and brothers of other faiths. We are in a sense liberated from the box our culture has put us in, liberated from the sidelines. We can make common cause together with people of other faiths.

To do this we need to be in dialogue with each other, as we are today, and to call together for education about religion to be part of our school curriculum. And to work together to break down stereotypes. To get to know each other, to be in relationship is perhaps where we start. 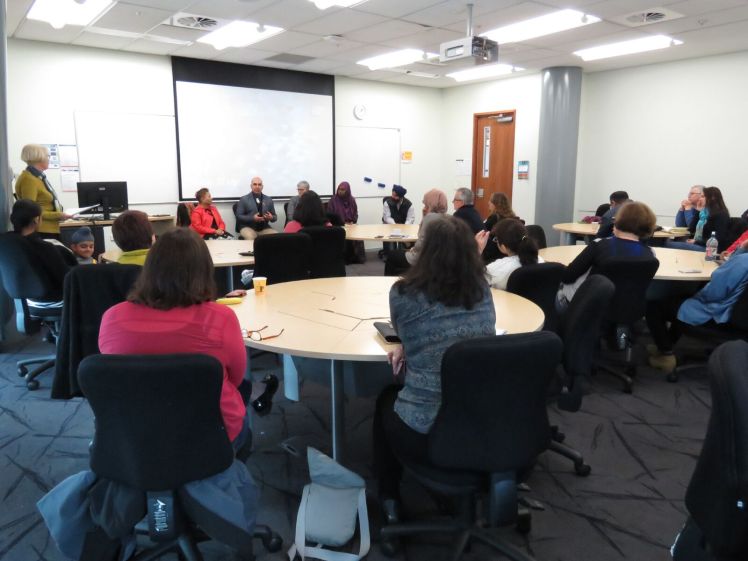